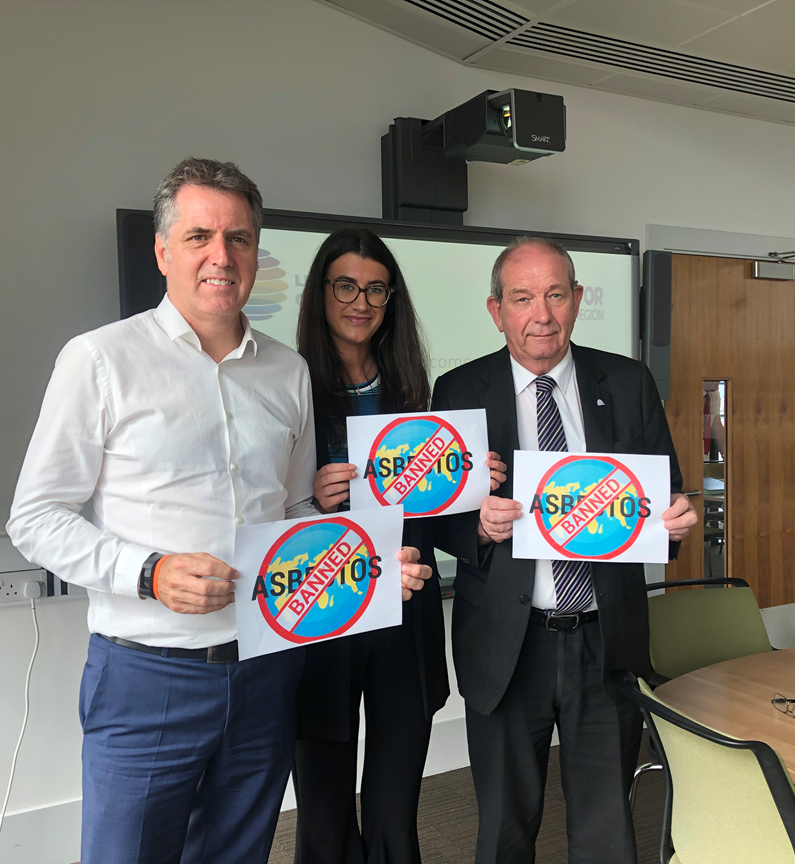 Liverpool; UK: In the aftermath of Brexit, the very real threat posed by trade deals with foreign governments which have not banned asbestos has been brought to the fore by a civil society campaigning group based on Merseyside. According to John Flanagan; Support Worker for the Merseyside Asbestos Victims’ Support Group (MAVS):

“Decades of Liverpool dock workers were exposed to lethal cargoes of asbestos transported to the UK through our docks. As a result of this and other toxic exposures, the Merseyside area has a horrendous incidence of asbestos-related diseases including fatal cancers. MAVS has been working for more than 25 years to support the injured and obtain justice for them and their families. We have become increasingly concerned about the possibility of toxic imports via Liverpool in the aftermath of Brexit. Any deal with the US – a country which has no asbestos ban and continues to use asbestos in a range of products – must stipulate that no shipments of asbestos-contaminated goods would be allowed to enter the UK.”

Acting on the concerns of MAVS, a meeting was sought with Steve Rotheram, the Metro Mayor of Liverpool City Region and the Honorary President of MAVS. In a letter he wrote following the August 13, 2019 meeting with MAVS, he asked Andrea Leadsom MP, the Secretary of State for Business, Energy and Industrial Strategy, to:

“guarantee that any trade deal negotiated with any country, and specifically the USA, does not allow the importation of asbestos, in items containing asbestos – such as automotive parts.”

Commenting on the meeting with MAVS, Mayor Rotheram said:

“The people of the Liverpool City Region have paid a high price for the UK’s inglorious asbestos trade with most of the country’s deadly imports of asbestos throughout the 20th century coming through our docks. Considering the Conservative Government’s profit-driven objectives to deregulate and downgrade measures protecting occupational and public health, it may well be necessary to act unilaterally to protect our citizens.”